A memoir on Guruji on his 16th death anniversary

I remain constantly appreciative of the fact that how fortunate I am to have lived in the times of Guruji. On Guruji’s 16h year of passing, I reminisce one of my earliest dance tours abroad under my Guru, Madhavi Didi and Guruji (Kelu babu Sir).
It was the autumn of 1999, and we were to go to Brazil for nearly a month long tour. I ,along with Piyali di and Arushi were rehearsing under the watchful eye of our Guru, Madhavi didi supported by a very good team of musicians in the Gandharva Mahavidyalaya. Till the last week before leaving, I was not aware that Guruji was to join us for the tour, or perhaps I was little unmindful…since I was very young at that time, and in my formative years, where I was gaining experience as a travelling artist, I was more to myself and concentrated on the dance part only. Guruji joined us at the rehearsals in Delhi, 2 or 3 days before the trip. Madhavi didi conceptualised the programme as “Generations”, with Guruji spearheading the movement of Odissi, Madhavi didi as the torch bearer and we the young dancers, following the legacy. In the grand finale, “Moksha”, we all had to come together for the shloka “Madhu vata Ritayate” in which Guruji directed the positions. For me it was quite overwhelming to share the stage with Guruji. Dancing on his items, as part of the regular class practice was one thing and sharing stage with him was another……given the fact that one was standing with the legend who was magnanimous with his craft yet looked so simple, in itself was timorous for the young me.
Even though I had some previous interactions with Guruji on the part of being a regular attendee on his workshop at Sangeet Shyamala in Delhi, I still could not absorb the fact and excitement of spending more than 3 weeks with him abroad and would be able to watch him dance, this close. As we progressed with the tour, within few days, my fear and hesitation faded away. He was like a family—warm, caring and compassionate….watching him from close quarters, I realised that he was the simplest person I have ever came across. I was astounded about how before each performance he would decorate Lord Jagannath with all the adornments, starting from the large pieces to the tiny ones with great details and with an unfainted zeal and devotion.
From the wings, I took great pleasure in listening to the audience hooting in great delight when he entered the stage for the Ashtapadi. His Kuru Yadunandan moments gave me goose bumps. In the greenroom, many from the audience would come with tears in their eyes and with deep admiration…. Such was his ability to touch every person individually who was watching him…A true devotee in every sense, in and out of stage.
As I read more about him, watched his documented biographical films, heard stories about him from Madhavi didi, I reiterate the fact that Guruji was a gift to the world. Not only his dance, but his entire life was a treasure of values that will continue to inspire and nurture the generations of artistes.
As I am penning down my beautiful recollections about Guruji, I want to express my deepest gratitude to my Guru Smt. Madhavi Mudgal for her teaching, care, encouragement and guidance and most importantly, being instrumental in creating my precious memories with Guruji by building wonderful opportunities for us to know our most revered and beloved - GURUJI.
Shraddhanjali and Koti Koti pranaam. 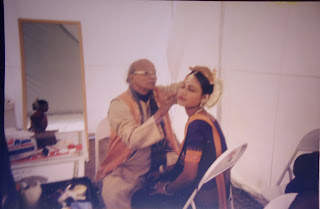 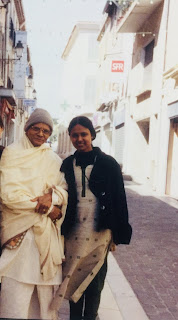 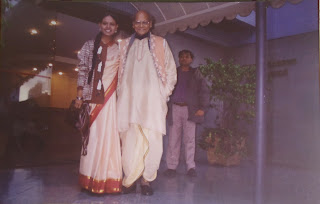 Popular posts from this blog

September 02, 2020
Moumita Vaats  (Ghosh) - "Dance" a meditative escape Indian classical dances as they are known to have made their journey from temples to performing spaces have uplifted the human soul profoundly towards self actualization. The world currently we live in, is engulfed with chaos, worries and turbulence of varied nature. The art of dance produces a positive shift for the practitioner allowing him to leave the mundane and enjoy the inner bliss emanating out of his daily Sadhana aimed towards surrendering to the almighty. Practicing dance for long hours or doing Riyaz propels a sense of immense satisfaction and connect one to the higher self and thus this interconnections with the core transports one to silence of another kind or in a state of raised awareness, while the body constantly moves with songs and syllables. But then when there is so much is going around a person’s day today activity and one is trying to meet dance in his current circumstances, one wonders, where does
Read more 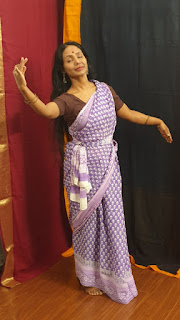 Dance gently guides us to enter the realised state. By increasing the awareness of our energy, beginning with our bodies which know of the complex patterns traced in the space ,recognise the rise and fall of the breath and create all of those geometry and symmetry of the form, gradually slow down and stop reacting. The dancing body/ ego doesn’t exist anymore. All that is remained is the state of awareness and just the dance in the present moment. In this process the spirit embrace compassion and kindness for all beings while continuing its journey to be immersed into the practice/DANCE.
Read more

Moumitaodissi
Moumita Vaats is an exponent of Odissi dance based at Delhi, India. A keen interest, study and practice of the art helped her inculcate technical prowess, finer nuances and aesthetics in presentation of the dance form. Attending the periodic workshops conducted by the great maestro, late Guru Kelucharan Mohapatra enriched her ideas with insights, further strengthened the learning process. With her dedication towards her art and consistent strive for excellence, she has emerged as one of the finest young soloists of the style. In her artistic pursuits, Moumita is trying to find scope and avenues where her understanding of Odissi in terms of movement, vocabulary and music along with her creative instincts make way for the choreographic works within the periphery of the classical idiom of Odissi dance.